Currents is comprised of four related groups of works that utilize the same imagery based on headlines, texts, and photographs found in both mainstream and counterculture U.S. newspapers, including: the New York Times, Los Angeles Times, and Berkeley Barb, among others. Study for Currents are the original collages that served as the source for the editioned prints in the series. Features (from Currents) and Surface Series (from Currents) are screenprints that were published by Dayton’s Gallery 12, Minneapolis, and Castelli Graphics, New York. All thirty-six original collages were reproduced in another editioned work, a fifty-four foot print also entitled Currents. 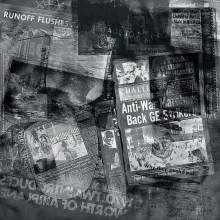