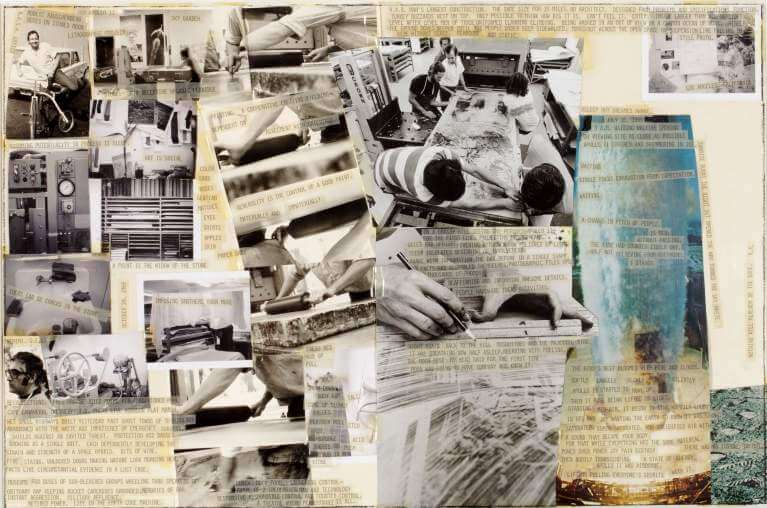 Stoned Moon Drawing, dated October 28, 1969, records Rauschenberg’s reflections on the Apollo 11 launch in July of that same year and the lithographic series it inspired. Embedded with the artist’s writings are photographs by Sidney Felsen and Malcolm Lubliner, who documented the working process at the innovative print studio Gemini G.E.L., Los Angeles, along with official images from NASA. The right side of the composition features the rising smoke plume of the rocket launch and the first boot prints on the moon’s surface. This work, together with the thirty-four Stoned Moon lithographs and the nineteen drawings and collages for the unpublished Stoned Moon Book, provides a singular account of the space program and humankind’s first lunar landing. In the collaged text, he remarks on the environs of Cape Canaveral, Florida, “highways built yesterday past ghost towns of technology abandoned with the haste and impatience of emergency surgery.” He intimates the anthropomorphizing sentiment, “My head said for the first time moon was going to have company and knew it.” Rauschenberg’s impressions contain a mixture of trepidation and wonder that conveys the technological and astronomical sublime. 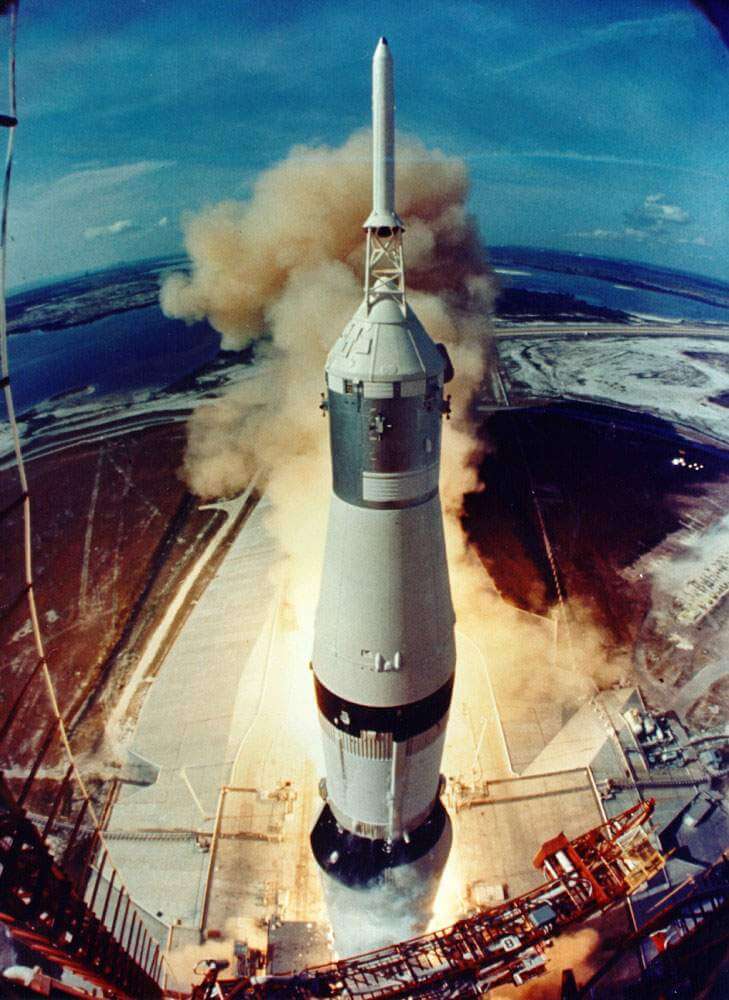 In the summer of 1969, at the invitation of NASA, Rauschenberg witnessed the Apollo 11 space launch, the first manned mission to the moon. Stoned Moon Drawing contains Rauschenberg’s account of the event, “The bird’s nest bloomed with fire and clouds. Softly largely slowly silently Apollo 11 started to move up. Then it rose being lifted on light. In its own joy wanting the earth to know it was going. Saturated, super-saturated, and solidified air with a sound that became your body. For that while everything was the same material. Power over power joy pain ecstasy there was no inside, no out. Then bodily transcending a state of energy. Apollo 11 was airborne, lifting pulling everyone’s spirits with it.” 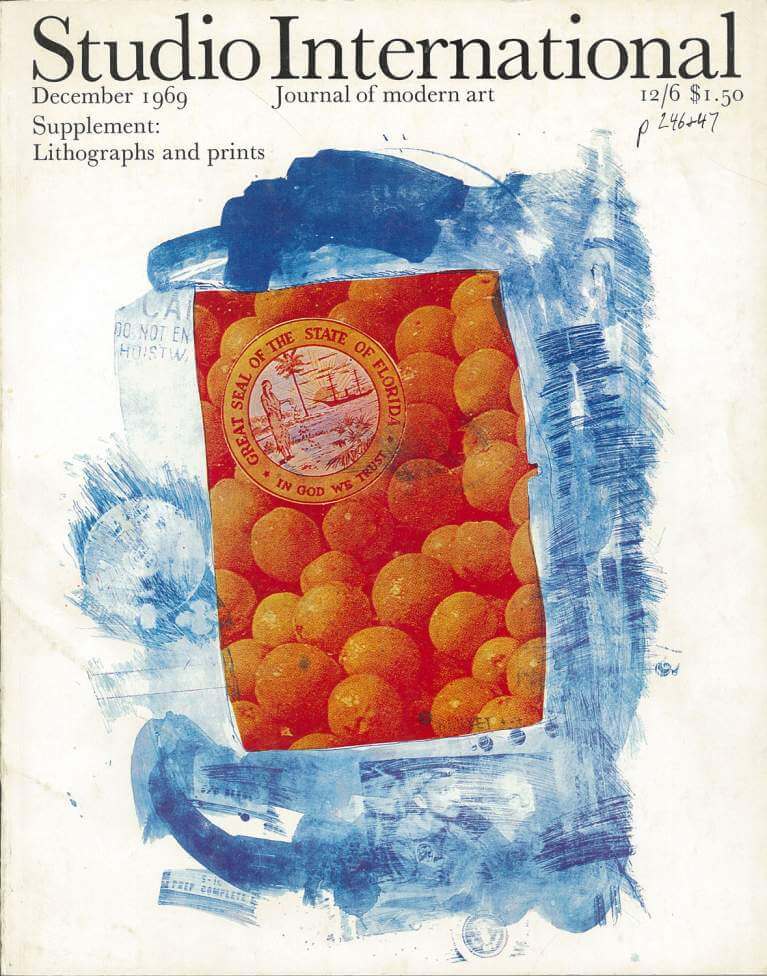 Stoned Moon Drawing was published as a black-and-white, double-page spread in the December 1969 issue of Studio International. The cover featured the lithograph Banner (1969) from the Stoned Moon series. The image prominently displays the state seal of Florida resting in a bed of oranges, its signature fruit. These familiar symbols rein in the otherworldliness of Cape Canaveral, where gigantic sophisticated machines intrude upon a vast, sparse landscape. First among the artist’s memories of being there, recorded in Stoned Moon Drawing, was the “free orange juice.” Rauschenberg purchased a property on Captiva Island off the Gulf Coast of Florida in summer 1968. By fall 1970, he would move there permanently. 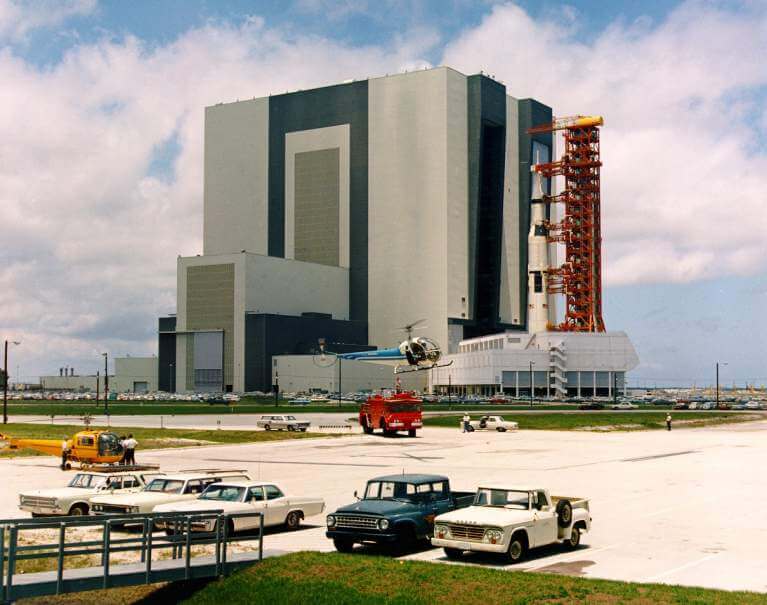 Rauschenberg dedicated the upper-right corner of Stoned Moon Drawing to his observations on the Vehicle Assembly Building (VAB) in Cape Canaveral, Florida. He marveled at the enormity of the monolith, built for the express purpose of assembling the Saturn V rocket for the Apollo 11 launch. Looming 525 feet tall by 518 feet wide and covering 8 acres, the VAB remains the world’s tallest single-story structure. According to Rauschenberg, “Only possible to think how big it is. Can’t feel it. Enter. Inside larger than all outsides. Level after level men of trade uniformed clanning [sic] climbing. Being washed in an [sic] out of view by a common ocean of work.” 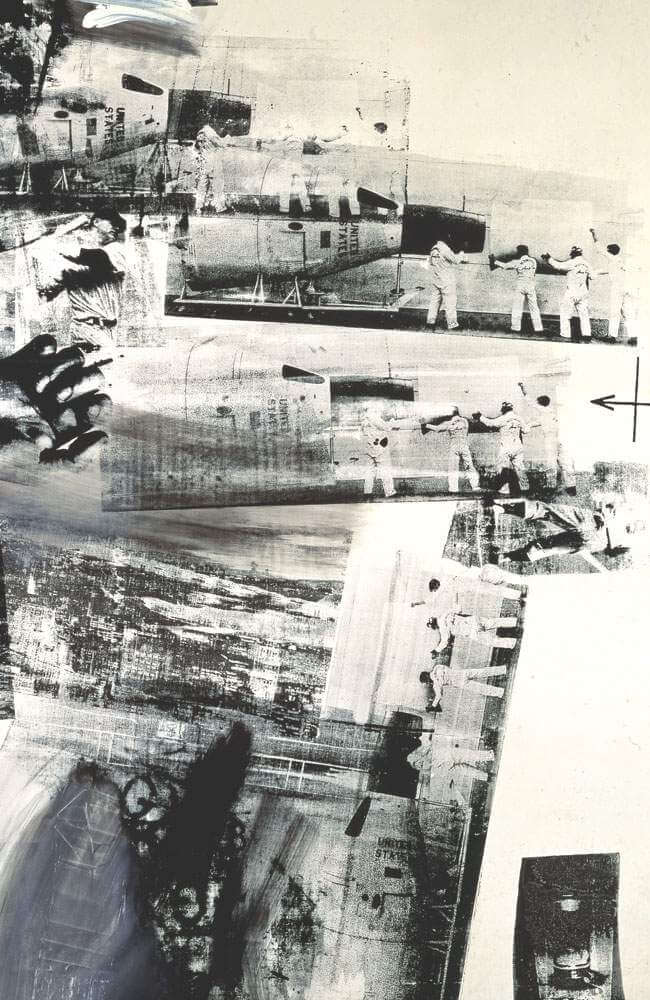 Rauschenberg was an enthusiastic observer of the U.S. space program from its beginning, enlisting mass-media images of its activities in the picture inventory for his silkscreen paintings (1962–64). A Newsweek magazine image of NASA officials handling a spacecraft (October 8, 1962) is emphatically repeated four times in Overcast I. The screen was used in at least six other paintings, including Calendar, Glider, Overcast II, Payload (all 1962), Barge (1962–63), and Shortstop (1963). “Payload” is a term from the space program playbook, referring to the carrying capacity of an aircraft. 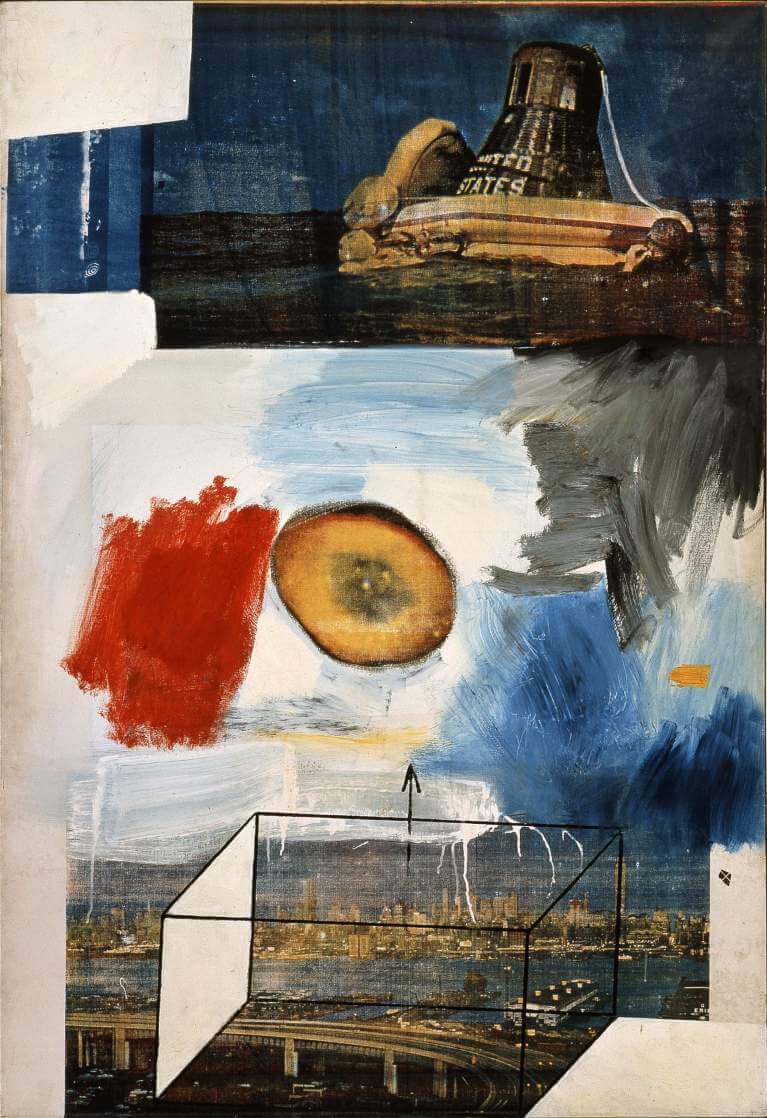 Rauschenberg’s interest in space program photography is also evident in Stop Gap (1963). The upper portion of the silkscreen painting is dominated by an image of the Sigma 7 splashdown from Life magazine (October 26, 1962). The spacecraft housed astronaut Walter H. Schirra Jr., who safely returned from a six-orbit mission around earth on October 3, 1962. The screenprint recurs in a number of contemporaneous paintings, including Die Hard (1963), Harbor, Whale (both 1964), and Untitled (1964–65; RRF 64.027). Rauschenberg’s engagement with the silkscreen process coincided with his initiation into lithography in 1962.

Rauschenberg was initially skeptical of lithography but was persuaded to work in the medium by Tatyana Grosman while at her workshop, Universal Limited Art Editions, West Islip, New York, in 1962. He quickly became a devoted practitioner, and the following year, his lithograph Accident (1963) was awarded the Grand Prize at the 5th International Exhibition of Graphic Art, Ljubljana, Yugoslavia. A press release issued by the Museum of Modern Art, New York, on June 20, 1963, announcing the achievement, includes the artist’s statement on his conversion, “I began lithography reluctantly, thinking that the second half of the twentieth century was no time to start writing on rocks. This biased idea was soon consumed in the concentration any unfamiliar medium requires. Lack of preconception and recognition of the unique possibilities in working on stone, not paper or canvas, suggested that the approach acknowledge this.” The distinguishing characteristic of Accident is the diagonal fissure caused by a break in the lithographic stone. Rauschenberg made the unusual decision to proceed with printing, embracing the accident, which he viewed as an enhancement rather than an interruption. In Stoned Moon Drawing, he wrote, “ideas can be cracks in the stone,” and recorded the poetic attribution, “a print is the widow of the stone.” Cracked stones would affect several lithographs in the Stoned Moon series: Brake, Ghost, Horn, Marsh, and Sack (all 1969). 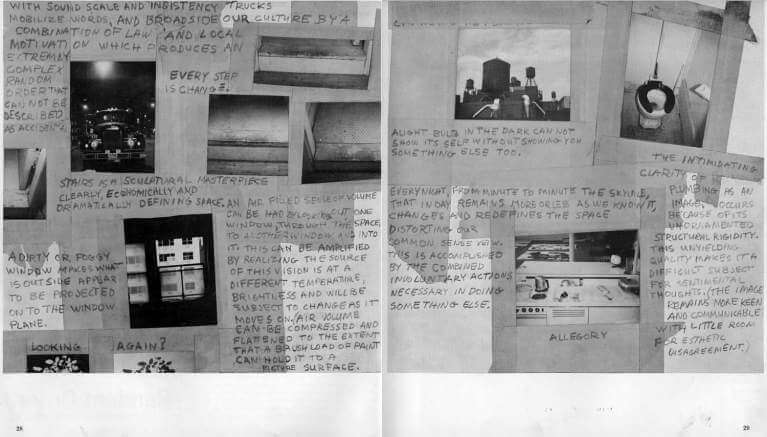 The format of Stoned Moon Drawing, combining image and text, is reminiscent of Rauschenberg’s contribution to the inaugural issue of the short-lived art journal Location, edited by Thomas B. Hess and Harold Rosenberg. In Random Order, he collaged his own aphoristic writings with original photographs. Imparting insight, observation, rune, and enigma, the texts include the commentary, “With sound and scale and insistency trucks mobilize words, and broadside our culture by a combination of law and local motivation on which produces an extremly [sic] complex random order that can not be described as accidental.” The eponymous concept informs Rauschenberg’s approach to collage and illuminates the manner in which he registered events throughout the Stoned Moon works. From Random Order to Stoned Moon Drawing, there is a shift from handwritten to typed text, and the artist’s own photographs to images taken by others or drawn from mass-media sources. This development may signal his romance with technology in the latter half of the decade. 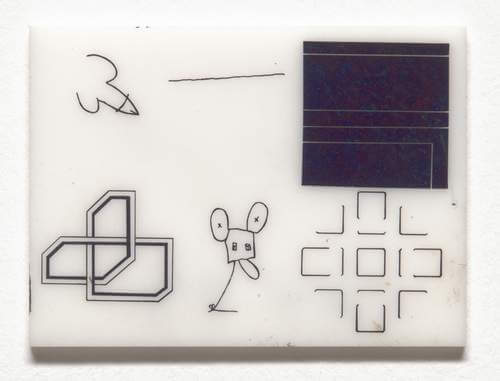 In 1969, artist Forrest Myers invited his contemporaries to contribute drawings that he intended to send to the moon. Myers then enlisted Bell Laboratories engineers Fred Waldhauer and Robert Merkle to shrink the drawings and etch them onto a tiny ceramic wafer, measuring 3/8 x 3/4 inches. Rauschenberg furnished the line drawing at top center. Unable to gain official sanction for delivering the piece into space, Myers claimed that an engineer at Cape Canaveral, Florida, secretly attached the wafer to the Intrepid lunar module for the Apollo 12 mission. This collaborative work became known as The Moon Museum (1969). Apollo 12 launched on November 14, 1969, the day after the premiere presentation of Stoned Moon lithographs at Castelli Gallery, New York. 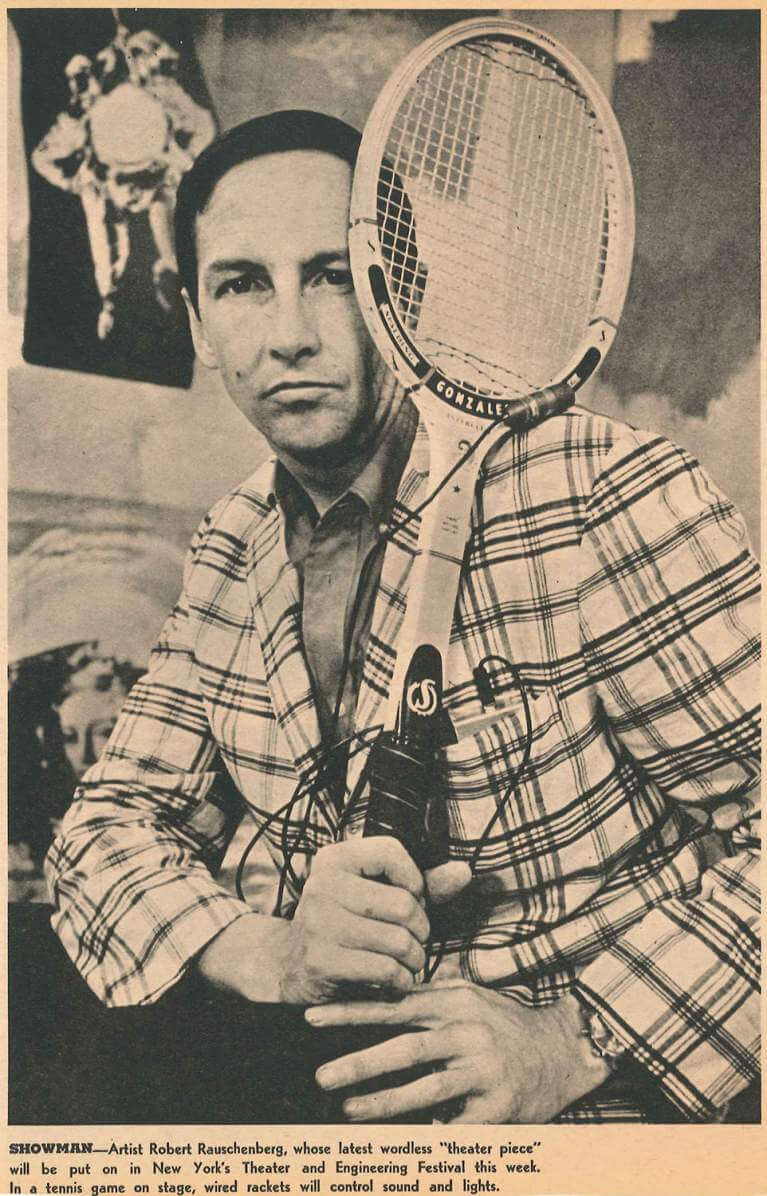 In fall 1966, Rauschenberg was preparing Open Score, a work that hybridized his waxing interest in theater and technology. (This intersection was perhaps epitomized by NASA, as he expressed in Stoned Moon Drawing, “a theatre where performance is all.”) In the New York Times Magazine portrait, Rauschenberg sits in front of his painting, Axle (1964). The parachuting astronaut in the upper left corner is another NASA image that recurs in several silkscreen paintings (see “Art in Context: Retroactive I”). The artist holds an electronically rigged tennis racket, a prop for Open Score, conceived for 9 Evenings: Theatre and Engineering (October 1966). Now considered an art-historical landmark, 9 Evenings was plagued by technical difficulties and malfunctions. Rauschenberg embraced the idea of failing well. Unfavorable, even undesirable, results could still be creatively valuable. New York Times critic Clive Barnes scoffed, “If the American engineers and technologists participating in this performance were typical of their profession, the Russians are sure to be first on the moon” (October 15, 1966). By the end of the decade, the artist would witness the launch of Apollo 11, the first manned lunar mission, and his artwork may have been sent to the moon by Apollo 12. It was the peculiar alchemy of art and technology after all that NASA sought in inviting artists to observe, interpret, and represent its endeavors.