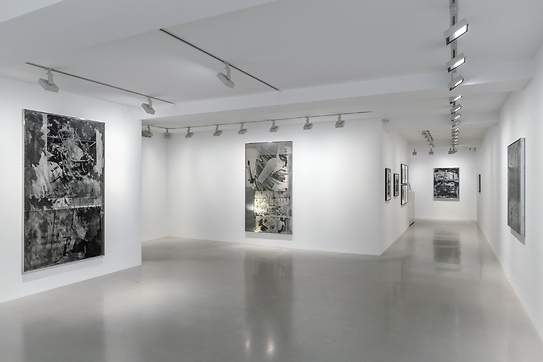 "What [Rauschenberg] invented above all was […] a pictorial surface that let the world in again." —Leo Steinberg, 1972

"The surfaces swirl reflectively, their silvery, dreamy quality like so much brushy subconscious spillage. This is painting weather, Rauschenberg weather—instinctive, open, and pretty free." —David Salle, 2020

Galerie Thaddaeus Ropac Paris is pleased to present an exhibition of Robert Rauschenberg’s Night Shades and Phantoms from 1991, two series of metal paintings composed of silk-screened photographic images and gestural strokes on aluminium supports. Made during his decade-long experimentations with metal, these paintings are characterised by their grayscale palette, which ranges from the Night Shades’ painterly chiaroscuro to the Phantoms’ mirrored surfaces and ethereal translucency. Rauschenberg creates dream-like imagery which appears and disappears as a result of light, shadows and reflections across the artworks’ surfaces. The works respond to their surroundings, playing with the viewer’s perception and bringing the world into the paintings, recalling Rauschenberg’s famous maxim: "Painting relates to both art and life. Neither can be made. (I try to act in the gap between the two.)." Organised in collaboration with the Robert Rauschenberg Foundation, the exhibition will also present a selection of photographs by the artist used as source images for the paintings on view.

One of the most influential artists of the twentieth century, Rauschenberg revolutionised the picture plane by bringing together painting, photography and sculpture in a highly inventive way. From the mid-1980s onwards, following his sojourn in Chile, he swapped canvas for sheets of first copper, then brass, bronze and in the case of the Night Shades and Phantoms, brushed and mirrored aluminium. Rauschenberg’s use of metal can be traced back to his earlier sculptural assemblages made with industrial waste and scrap metal, as in his Elemental Sculptures (1953/59), as well as in his Combines (1954–64) and his later Gluts (1986–89/1991–94). In the Night Shades and Phantoms, Rauschenberg used metal as a pictorial device that references the reality of an industrialised world while also serving as a reflective surface that captures images, impressions and memories.

For the Night Shades, Rauschenberg silkscreened images onto mirrored or brushed aluminium, applying a tarnish called Aluma Black with gestural strokes. At times the images are obscured by the tarnish, leaving expressive spills of black; at others, Rauschenberg mixed varnish with pigments which resist the tarnish and further enhance the works’ painterly qualities. For the Phantoms, Rauschenberg experimented with a different type of metal – mirrored, anodised aluminum – which repelled the tarnish, producing spectral images that appear or disappear according to one’s viewpoint. Therefore, the Phantoms developed from the Night Shades as an almost ghostly double. Their title alludes to their phantasmagoric effect, while the term Night Shades refers to a poisonous plant that bears dark berries; as a compound word it also suggests twilight or a curtain falling.

The images used in the silkscreening process are Rauschenberg’s own photographs, taken during his various trips across the United States and abroad between 1979 and 1991, including his travels for the Rauschenberg Overseas Culture Interchange (ROCI) project (1984–91), which aimed to achieve mutual understanding between different cultures across the globe through creative exchanges.

By bringing together disparate elements from a variety of sources and locations within the same picture plane, Rauschenberg communicates a desire for interconnectedness. The elements are combined in compositions that are poetic and witty, encouraging the viewer to create their own associations between images and words. The iconography is extremely rich and varied. Snapshots of urban life as well as historical and cultural artefacts such as the Berlin Wall or a temple in Malaysia, are juxtaposed with images of trees, plants and fauna, and at times combined with gestural marks that emphasise a sense of vitality and movement. And yet, the images can be difficult to grasp, their evanescence and layering also suggesting the elusiveness of memory.

In the catalogue accompanying the exhibition, artist David Salle writes: "Rauschenberg knew how to let forms and masses invade and affect each other, energising the surface to build a sense of pictorial consequence, itself part of something larger, deeper. What that something is exactly is hard to name, but it imbues the experience of looking with a sense of lift, of experience in motion, aloft."

Rauschenberg’s process of incorporating his own photographs of past impressions and experiences also suggests a self-reflective and retrospective approach. It is perhaps not a coincidence that in 1991, the same year the Night Shades and Phantoms were made, Rauschenberg was the subject of major exhibitions spanning his career, presented at the Whitney Museum of American Art, New York; the National Gallery of Art, Washington, D.C; and the Menil Collection, Houston.

The exhibition is accompanied by a fully illustrated catalogue with an essay by artist David Salle and author Sarah French.