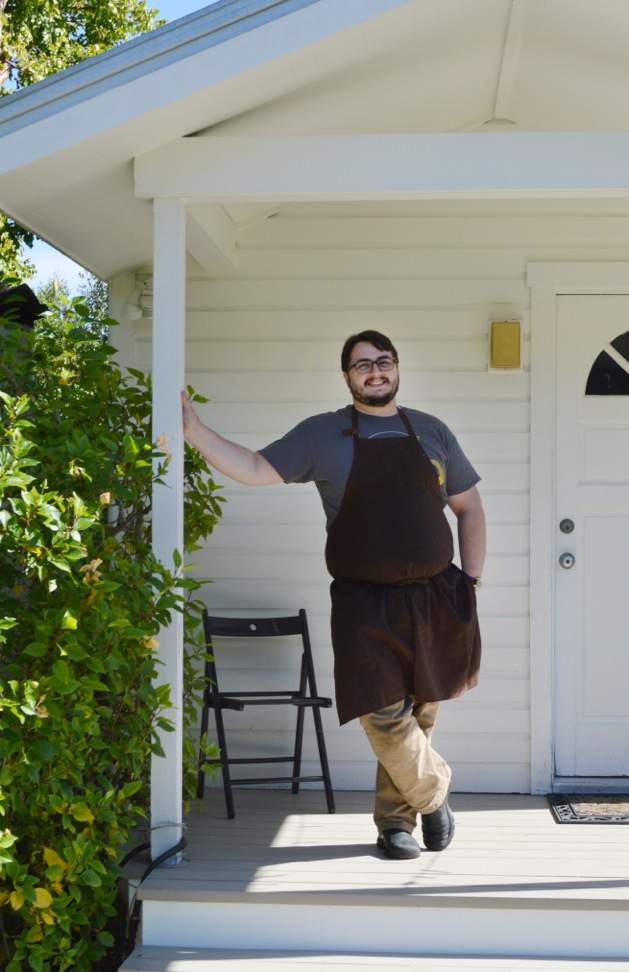 We were curious to hear more about Isaac Saunders, so we asked him a few questions to learn about his earliest memories of cooking and his inspiration for his career. Here is what we learned:

What is your first memory of cooking?

I can’t put a finger on my first memory of cooking as someone in my family was always doing something in the kitchen at almost all hours of the day when I was young.  However I do remember my first ‘wow’ moment I had with food.  I was maybe 8 or 9 years old and my dad had cooked a simple dish of chicken roasted with cardamom and yogurt and it blew my mind.  The chicken was juicy, the sauce was fragrant from the cardamom and acidic from the yogurt.  Still one of my fondest early childhood memories.  Unfortunately I have not been able to recreate that dish to date…

Where did you grow up?

I grew up in Arlington, Virginia, right across the Potomac River from DC.  We had a small house, maybe 1200 sq ft, on a fairly large property for the area.  We had a large back yard and my mom and dad were big entertainers, inviting all sorts of people over for barbeques and cook outs and family dinners.  There were three other families within the same block that had kids my age.  It was a bit of a circus at times.

Was anyone in your family a chef?

No one in my family was a professional by any means but both of my parents were great home cooks and versed in many different cuisines.  I grew up watching Julia Child and Jacques Pepin among many other old school cooking shows on PBS, learning about cooking alongside my parents.

Did you pursue any formal education in cooking?

Yes I did, I went to Johnson and Wales in Providence, RI for culinary school.

What is your favorite ingredient? What kind of food do you most enjoy cooking?

I can honestly say that I don’t have a favorite ingredient to cook with.  I like to work with anything interesting I can get my hands on.  Right now at the Residency I’m really loving the garden and all of the cool things we have planned for it as well as all of the amazing things it’s already kicking out.  I’m also really loving the access we have to amazing seafood here in Florida.  It’s a whole different set of fish and shellfish from what I’m used to, coming from Rhode Island.

What kind of food do you most enjoy eating?

It might sound a little cliche but anything that my Mom cooks.  I like simple, wholesome food… as long as someone else is cooking it!

Do you listen to music in the kitchen? If so, what are some of your favorite albums to cook to?

I haven't listened to music in the kitchen for most of my career but have started to more and more lately.  I’m pretty all over the place with my music preferences but have really been into my Amy Winehouse/Leon Bridges and Logic/Phora radio stations on Pandora lately.

What is the cookbook you refer to the most?

My absolute favorite cookbook ever is La Technique by Jacques Pepin.  It’s really an amazing book that highlights fundamentals in a way that no one else had really done until then.  However, I think the book that I refer to the most is called Coco, published by Phaidon.  It’s a really cool concept.  They took 10 of the best chefs in the world at the time and had them each give 10 people that they were excited about and had those chefs write about their restaurant/s and give an example of, and recipes for, a meal they would serve, whether it’s a tasting menu or a family style dinner. There’s something new to find every time I find myself in a new mood or phase.

What are some of your other passions?

To be honest I’m sort of trying to figure that out again.  I’ve been so focused on my career in food that I haven’t really taken much time to do anything other than cook.  I used to be really involved in music, playing piano and guitar for quite a few years when I was younger.  I still pick up my guitar every once in awhile but nothing serious in a long time.  My real passion right now is for my amazing partner, Sophie Slesinger, who I have unfortunately had to be away from for quite a while now.  We are both very ambitious people working towards fairly similar goals yet we have very different paths, you know how that goes...

Have you traveled much? What was your favorite destination?

Unfortunately I haven’t spent very much time traveling.  I spent a few months in Israel during high school on a semester abroad program and did a quick trip to The Netherlands with my Dad.  I have my sights set on a few countries in southeast Asia as well as South Korea and Japan.

What is the best piece of advice you would give to someone just starting to cook?

I honestly don’t think that I’ve been cooking professionally for long enough to be giving anyone advice on much of anything.  I’m still trying to figure out where I fit into this massive, complex and ever evolving industry.  If I were to say one thing it would be to find a mentor.  Someone that truly cares about you, not only professionally but personally.  It’s something that’s very very rare as this is an incredibly competitive industry, especially for entry level positions in higher quality kitchens.  However, once you do, if you do, stay with that person and learn everything from them that they are willing to teach.  The things that they may not be willing to teach you right away, observe.  Be aware of what’s happening around you and take notes.  I have been incredibly blessed to have had people in my career that have been willing train me and help me progress to where I am today.  If it wasn’t for them I’d still be flipping pink slime ridden burgers and asking “Fries with that?” in a hole in the wall somewhere.  Endless thanks to the five of them, Ben, Ed, Brad, Nemo, and Matt.