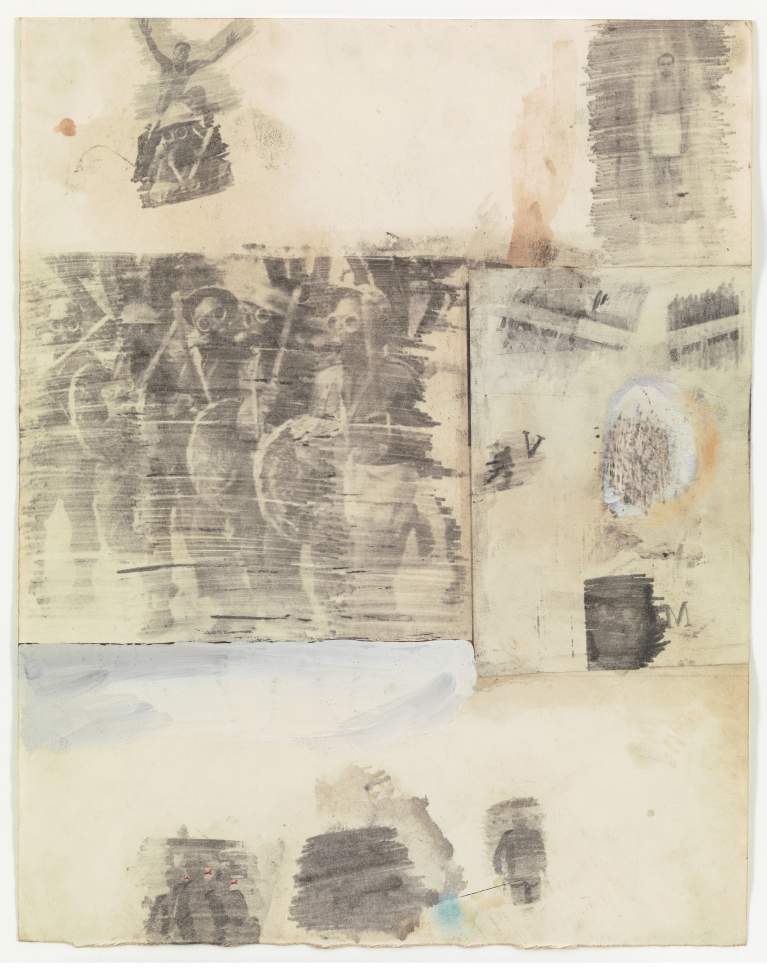 In Rauschenberg’s transfer drawings (1952, 1958–68), the artist recycles an American collective memory into alternative narratives that are disengaged from a linear history. These ethereal drawings reclaim scraps of printed media combined with hand-drawn and painted passages to make pictorial poems that subtly reflect the excesses of contemporary visual culture. Rauschenberg first experimented with the transfer technique—a process combining handmade strokes with readymade texts and images from newspapers and glossy magazines—during a trip to Cuba in 1952 (Untitled [Mirror], 1952). After soaking the printed image in a solvent—water in the earliest examples then turpentine or lighter fluid in later drawings—Rauschenberg placed the image face down on paper and transferred it with a series of hatch marks created by rubbing a dry pen nib across the back of the image. The results are edgeless units bound by the artist’s mark making.

Rauschenberg began a dedicated exploration of his solvent transfer process in 1958 when he applied familiar motifs from his three-dimensional Combines (1954–64) to two-dimensional surfaces. Evocative juxtapositions result, such as the appearance of historical images alongside contemporary politics in the drawings Cup, Cage, and Complete Relaxation (all 1958). In the drawings for Dante’s Inferno (1958–60), Rauschenberg deploys iconography derived from contemporary media to illustrate a classical narrative. Throughout these drawings, the viewer follows Dante and his guide, Virgil, as they enter the circles of hell (Canto I: The Dark Wood of Error, 1958; Canto XXI: Circle Eight, Bolgia 5, The Grafters, 1959–60; Canto XXXI: The Central Pit of Malebolge, The Giants, 1959–60).

A tension exists between the subject of the photographic source images and the mode of transmission in Rauschenberg’s solvent transfer drawings. These works flicker with varying degrees of visibility. As his friend and sometime collaborator composer John Cage once remarked, “it seems like many television sets working simultaneously all tuned differently.” The hatch-marked abstractions of the vibrant originals transpose easy-to-identify faces and products into mirrored images (Mainspring, 1965; Same Day Service, 1968). The artist stitches together disparate images in an act of artistic alchemy by selecting from the quotidian and arranging an editorial of the familiar, though briefly obscured. 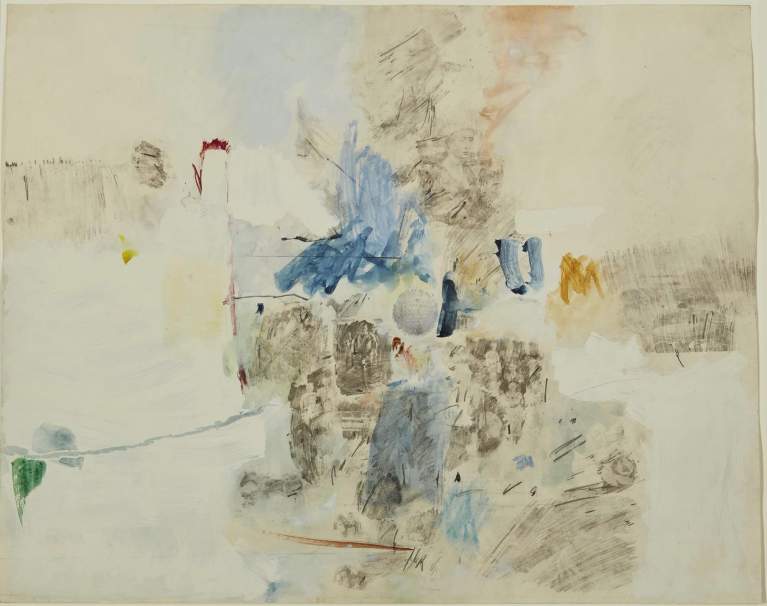 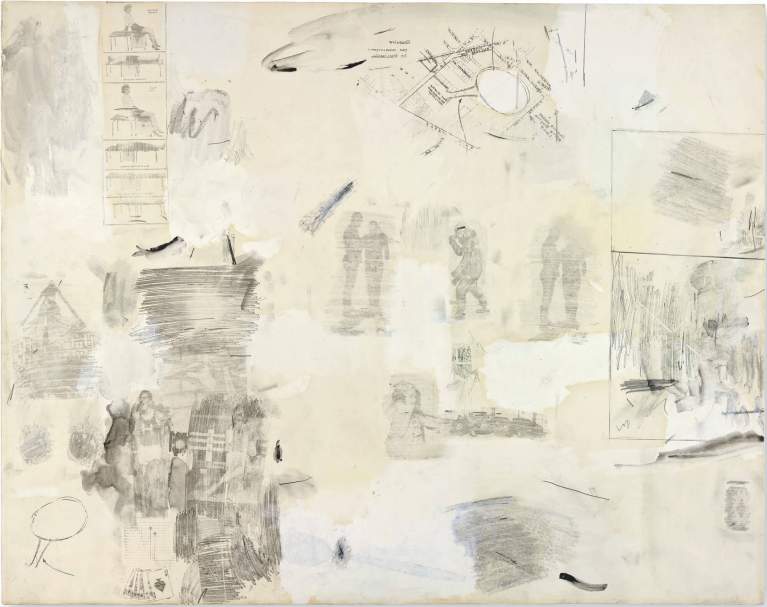 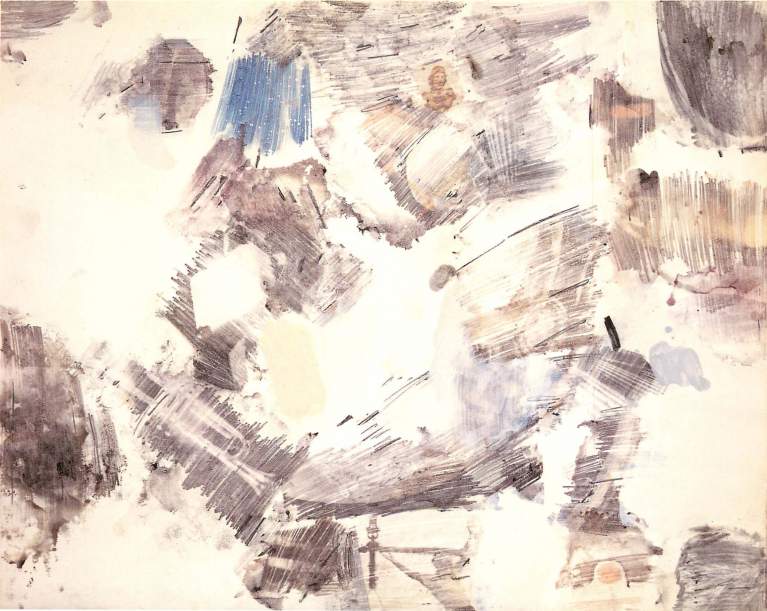 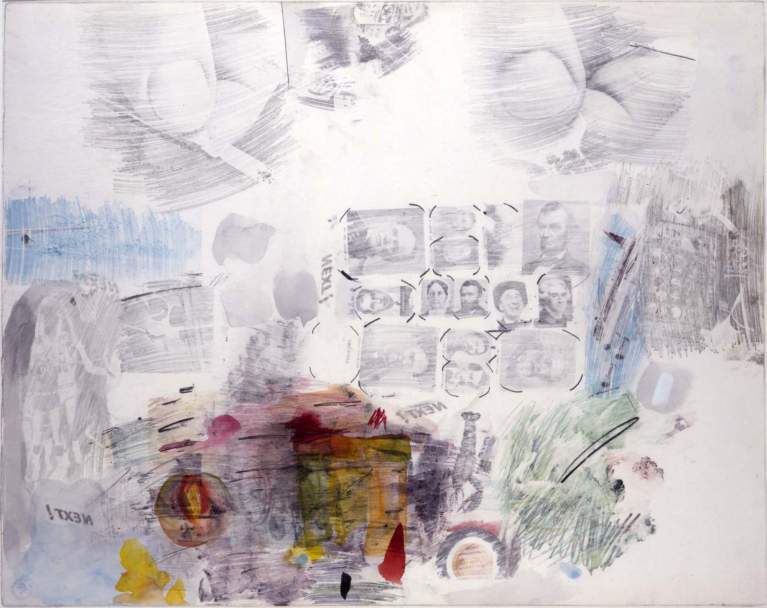 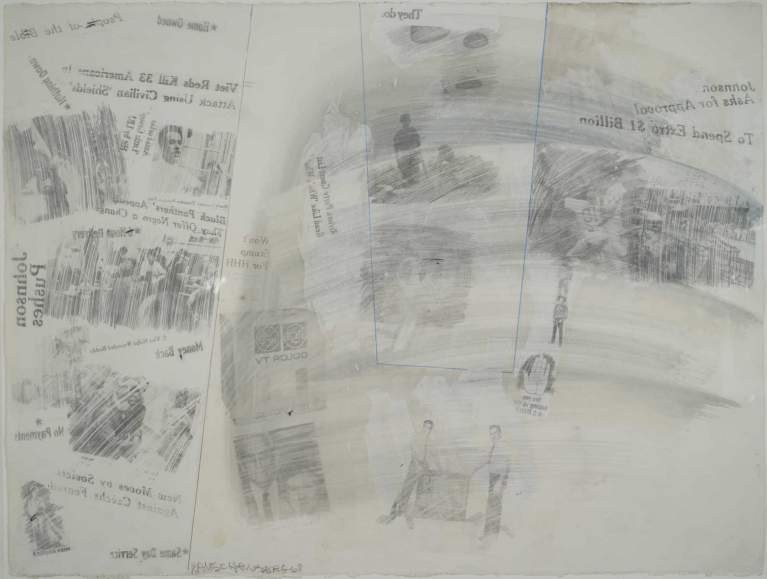 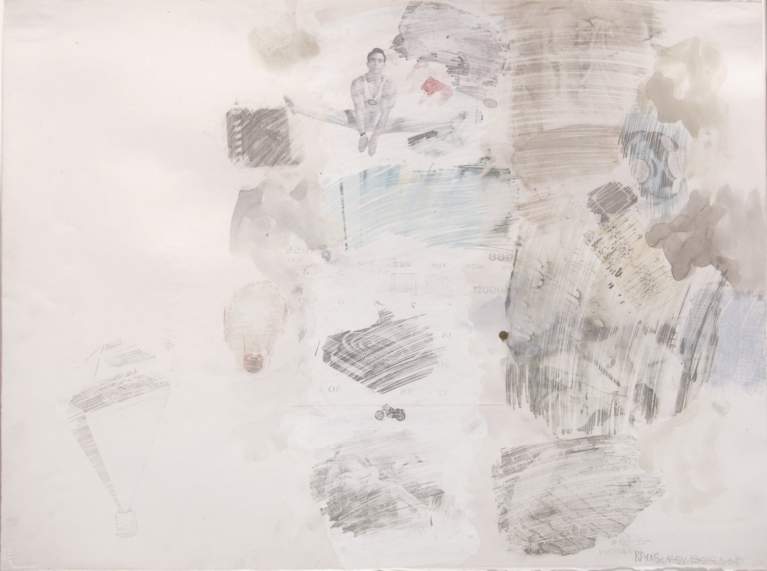